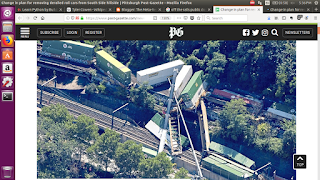 I first tried blogging about 9 years ago, hoping to make connections with people, and to share a sense of urgency about the alarming direction the world was going in. Blogging went hand in hand with trying to understand the world, as it seemed to really need understanding and correction to avoid the strong chance of things going totally off the rails.  The problem had to do with reality, and with what seemed like a massive breakdown of judgement as to what sources were trying to convey the truth (to the best of their ability), and which cared very little for the truth.  It was going to get worse, and worse, and worse.  I wrote a summary of my first and most active period of trying to fight disinformation is https://therealtruthproject.blogspot.com/2011/08/my-not-really-right-wing-mom-and-her.html It has always been true that different people have different realities.  This isn't relativism; it is just recognizing what most people mean by "reality".  As Alice Dreg
Post a Comment
Read more

There's got to be a pony in there somewhere.